Two years ago, on 1 October 2008, the EU Monitoring Mission began its patrols, only two weeks after Foreign Ministers of the 27 EU Member States had agreed to deploy an unarmed civilian mission to Georgia to monitor the implementation of the ceasefire agreements which brought an end to the 2008 war.

The Mission’s first task was to monitor the withdrawal of the Russian Armed Forces from the areas adjacent to the Administrative Boundary Lines (ABLs) of South Ossetia and Abkhazia. The Mission’s efforts since have been directed at preventing the renewal of hostilities and helping to make the areas close to the ABLs safe and secure for the local population.

Over the last two years over 700 staff from EU Member States, supported by over 100 local staff, have worked in the Mission, enabling over 15,000 patrols to be carried out on the ground. A multitude of skills, backed up by dedication and professionalism has ensured that the Mission has been able to carry out its mandated role effectively; observing the situation on the ground, reporting on incidents and through many hours of hard work, contributing to improving the overall security situation.


Since EUMM’s deployment the number of reported incidents has significantly decreased and the situation in the areas adjacent to the ABLs has largely stabilized. The challenge now is to address the root causes of the conflict beyond the short term efforts at stabilisation. 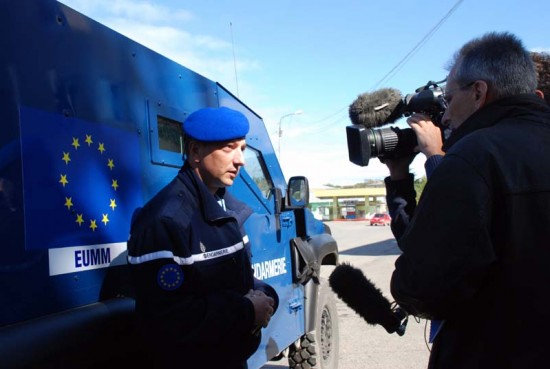