On December 2 the UN resident coordinator hosted a high level meeting in Tbilisi. The meeting aimed to raise awareness in the framework on the 16 Days of Activism against Gender Based Violence.

One of the speakers, Gerard A. Fischer, Deputy Head of EUMM called violence against women and girls the single most pervasive human rights violation of our times that devastates lives, fractures communities, and stalls development. 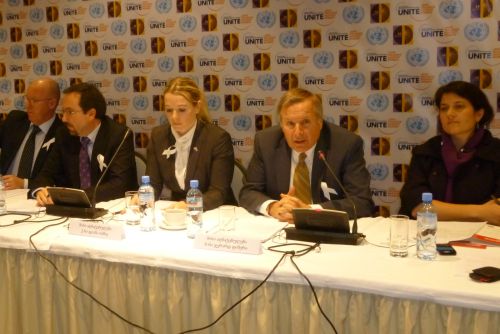 Mr. Fischer informed the audience on the implementation of this year’s White Ribbon Campaign in Georgia. The White Ribbon Campaign is the largest men-to-men global movement to stop men’s violence against women. Its message is straightforward: wearing the ribbon is a personal pledge to never commit, condone or remain silent about violence against women. This pledge includes all kinds of violence, be it physical or psychological, in public or in private, be it in peacetime or in war. The Campaign lasts from 25 November until 10 December.

Within EUMM more than 300 international and national staff, mostly men, actively endorse the campaign. EUMM’s current activities -amongst others- include a poster campaign with the support of Georgia’s National Rugby Team. The poster features four prominent rugby-players, who invite all potential perpetrators ‘to go and rather scrum with them’. The posters will be distributed to police stations, to schools and other public places across the country.

UN Women and the EU negotiated with the Georgian Ministry of Sports and Youth Affairs to support the White Ribbon campaign.