On 7 December François Delahousse, Deputy Director of the Caucasus and Central Asia, Continental Europe Branch of the French Ministry of Foreign Affairs visited the EU Monitoring Mission Headquarters. He was accompanied by Xavier Rouard, Deputy Head of the French Embassy in Georgia.

After the guests were welcomed by the Head of Mission Ambassador Andrzej Tyszkiewicz and his deputy Gerard A. Fischer, they were given an update on the security situation, the mandate and structure of the Mission, as well as recent achievements and challenges.

M Delahousse congratulated the irreplaceable work EUMM had been doing to contribute to stability in the region, especially along the Administrative Boundary Lines since the 2008 conflict. The Deputy Director also expressed his appreciation for the impartial reports sent from the ground to EU policy makers. He reiterated that France maintains its full support to both EUMM and the Head of Mission. 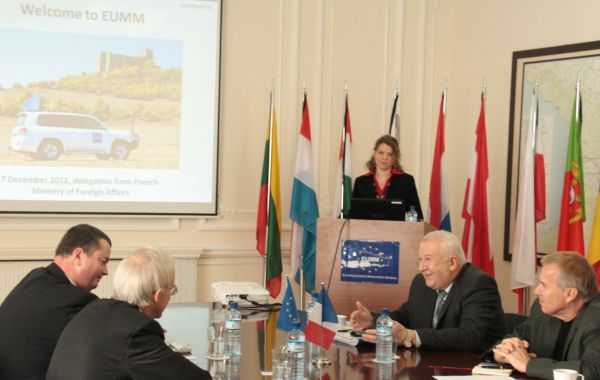