On 6 May, the EU Monitoring Mission received a high-level delegation from the Swedish Agency for Government Employers, the Folke Bernadotte Academy and other organisations for Swedish employers and employees.

The delegation was welcomed by Ambassador Andrzej Tyszkiewicz, Head of Mission, and Gerard A. Fischer, Deputy Head of Mission. Sweden has been from the inception of the Mission in October 2008 one of the principal contributors to the Mission in terms of number of staff, for which the Head of Mission thanked the key representatives, Mr Ulf Bengtsson, Director General, Swedish Agency for Government Employers, and Mr Sven-Eric Soeder, Director-General of the Folke Bernadotte Academy.

The visitors received a comprehensive briefing about the general security situation on the ground, current EUMM activities and recent challenges. The briefing ensued an in-depth Q & A session with focus on the Mission’s achievements of the past and future aspirations. Today, the delegation joined a patrol to Odzisi arranged by EUMM Field Office Mtskheta and later provided the delegation with the opportunity to meet with Swedish staff members. The delegation will also meet with representatives from the NGO community before returning to Sweden on Wednesday.

More about the Mission 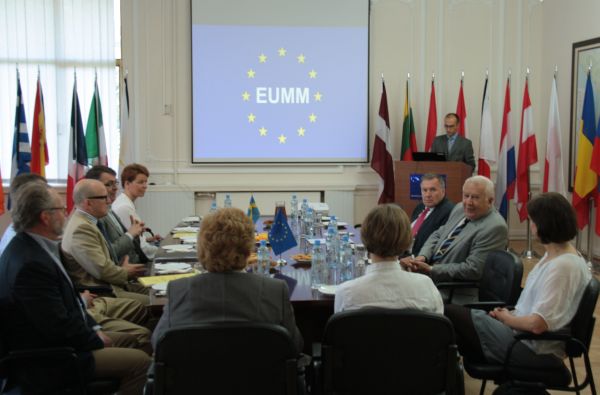