Georgian media note successful use of the Hotline

On 23, 24 and 25 August 2016, an incident took place along the Administrative Boundary Line (ABL) that illustrates the effectiveness of the “Hotline” – the 24/7 duty phone manned by EUMM monitors that allows for communications between EUMM and security “actors” on both sides of the ABL in order to solve disputes and situations that could potentially develop into conflict.

Georgian media reported that around 19:30 on Tuesday evening, 23 August, “Russian uniformed gunmen” entered the area of the Gduleti Pocket with a combine harvester and started reaping a crop of barley planted by a small-farmer from Sobisi village (Gori District).
A resident of the village, Shalva Chilindrishvili, told correspondents that the Russians had first appeared on the same territory when he was planting seed in February and placed wooden sticks, telling him the territory belonged to South Ossetia. However, since then he has not experienced any limitations of access. He said his family has owned this land (6 hectares) for years and it is currently under the control of the central Government. Journalists, broadcasting from the spot, reported that the nearest green “border signs” are located 1 km away.

The local Gamgebeli (Mayor), Davit Oniashvili, said that EUMM had been informed; and that EUMM monitors had already arrived at the spot. Notably, the combine harvester stopped working and returned to South Ossetia upon the arrival of the owner, the Gamgebeli and EUMM.

The Georgian State Minister for Reconciliation and Civic Equality Ketevan Tsikhelashvili visited the village and stated that the Hotline mechanism had been activated by the EUMM.  “Negotiations with the South Ossetian side are under way in order to allow local farmers to harvest their crops," she told a Georgian Public Broadcasting Channel correspondent, adding that EUMM together with the Ministry is actively involved in solving the issue as soon as possible.

Next day, on Wednesday, 24 August, Georgian media reported that the Chilindrishvili family, were given five hours to gather their harvest. Georgian TV channels said that this became possible due to the active efforts by the EUMM and, in particular, activation of the Hotline mechanism between the sides.
EUMM later spoke to media, saying the patrol team is observing the situation, speaking to local population and is carrying monitoring 24/7, as usual. 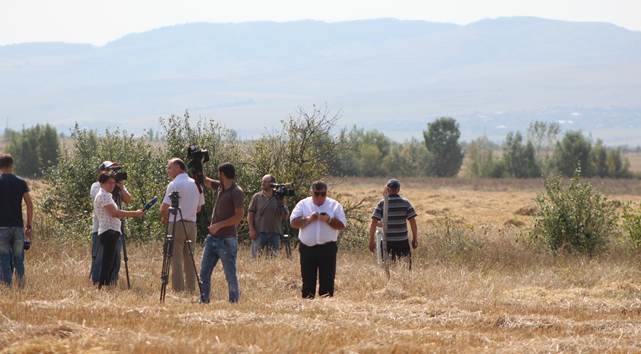 Media gathered at the spot

.
More observers of the incident