On May 6, European Union Monitoring Mission in Georgia (EUMM) participated in events dedicated to the celebration of Europe Day in Brussels, Belgium. This day, European Institutions opened their doors to the public. EU Open day is a great opportunity for citizens to discover/learn how the European Institutions work and what kind of activities various missions and operations undertake. EUMM’s stand attracted many visitors, including children who completed “difficult” quizzes on EUMM’s mandate! Visitors were excited doing the quiz and learning more about the Mission’s activities.

Several activities took place on EU Day. The occasion was even more highlighted by a visit of the High Representative of the European Union for Foreign Affairs and Security Policy Federica Mogehrini, who visited the stands of various EU Institutions and met people attending EU Open Days.

On the next day, Sunday 7 May, the Mission participated in the celebration of Europe Day (9 May) in the center of Tbilisi, Georgia. Despite inclement weather forecast, the sun decided to celebrate with us, and the event combined with the favorable weather, attracted many thousands of Georgians as well as guests of Georgia.

As last year, the EuroVillage was located in Rike Park, right next to the cable car station. The EU Delegation to Georgia coordinated the event, in which eighteen EU Member States also participated.

This year’s Europe Day theme “Celebrating new opportunities” smartly reflected the newly introduced visa free travel regime to Schengen countries.
The EUMM stand was located right across from the Peace Bridge and manned with Monitors and Interpreters from Field Office Mtskheta and with staff from the MHQ Press & Public Information Unit.
At the EUMM stand thousands of the newly redesigned EUMM Information Leaflets were handed out and kids of all ages had their photos taken wearing the Mission’s blue monitor vest and cap.
Georgian President Giorgi Margvelasjvili arrived, accompanied by Head of the EU Delegation to Georgia, Ambassador Janos Herman and was welcomed by EUMM Head of Mission, Ambassador Kęstutis Jankauskas. The President, wearing the Mission’s blue monitor vest and cap addressed several press and media people. He thanked the EUMM deeply for the Mission’s presence and its undertakings in Georgia.
All day entertainment was offered by bands, musicians and choirs from or sponsored by Member States. The Berlin based DJ/producer collective “Jazzanova” featuring Paul Randolph and the Georgian band Mgzavrebi closed the evening concert leading up to the traditional Georgian fireworks. 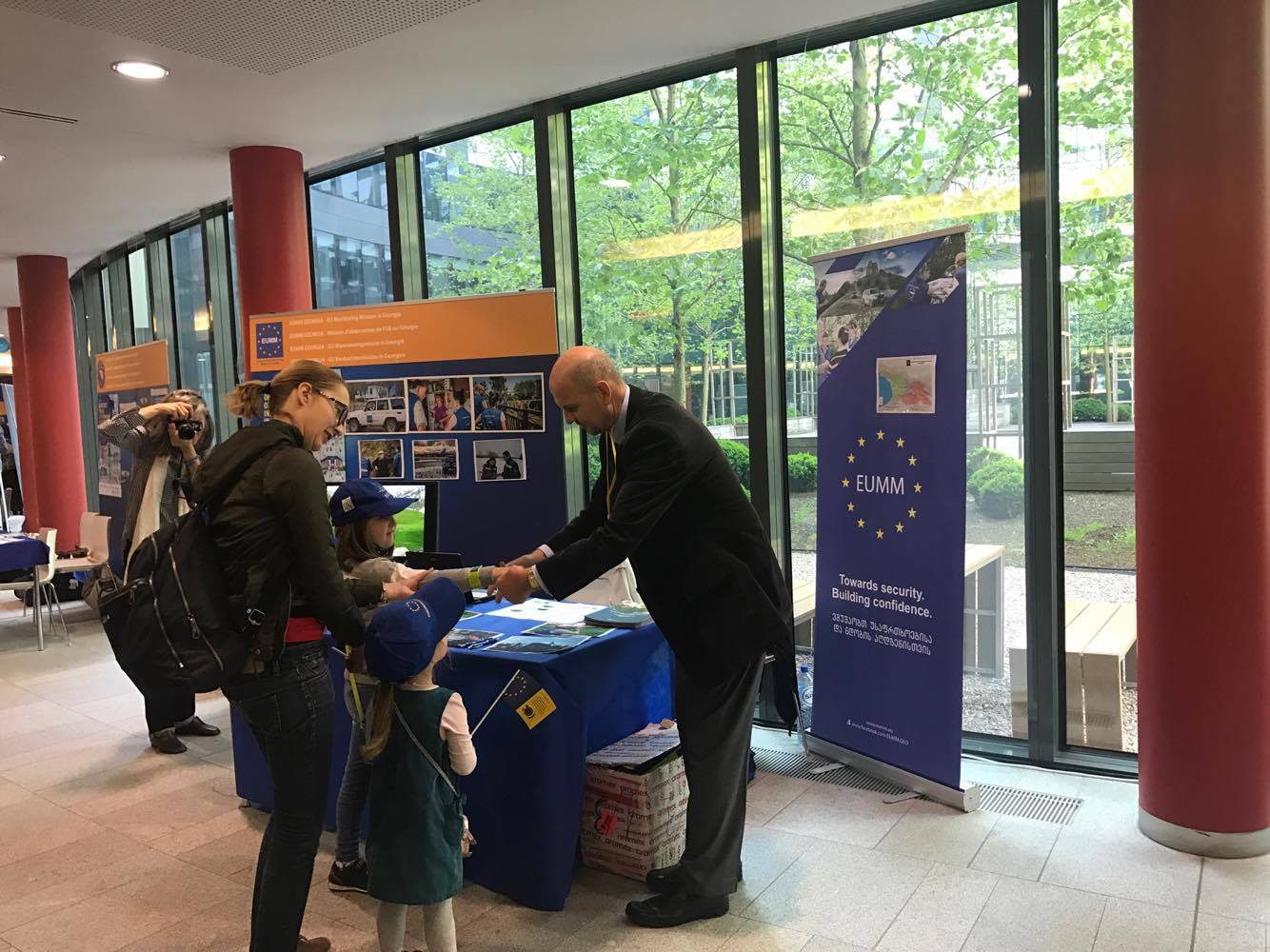 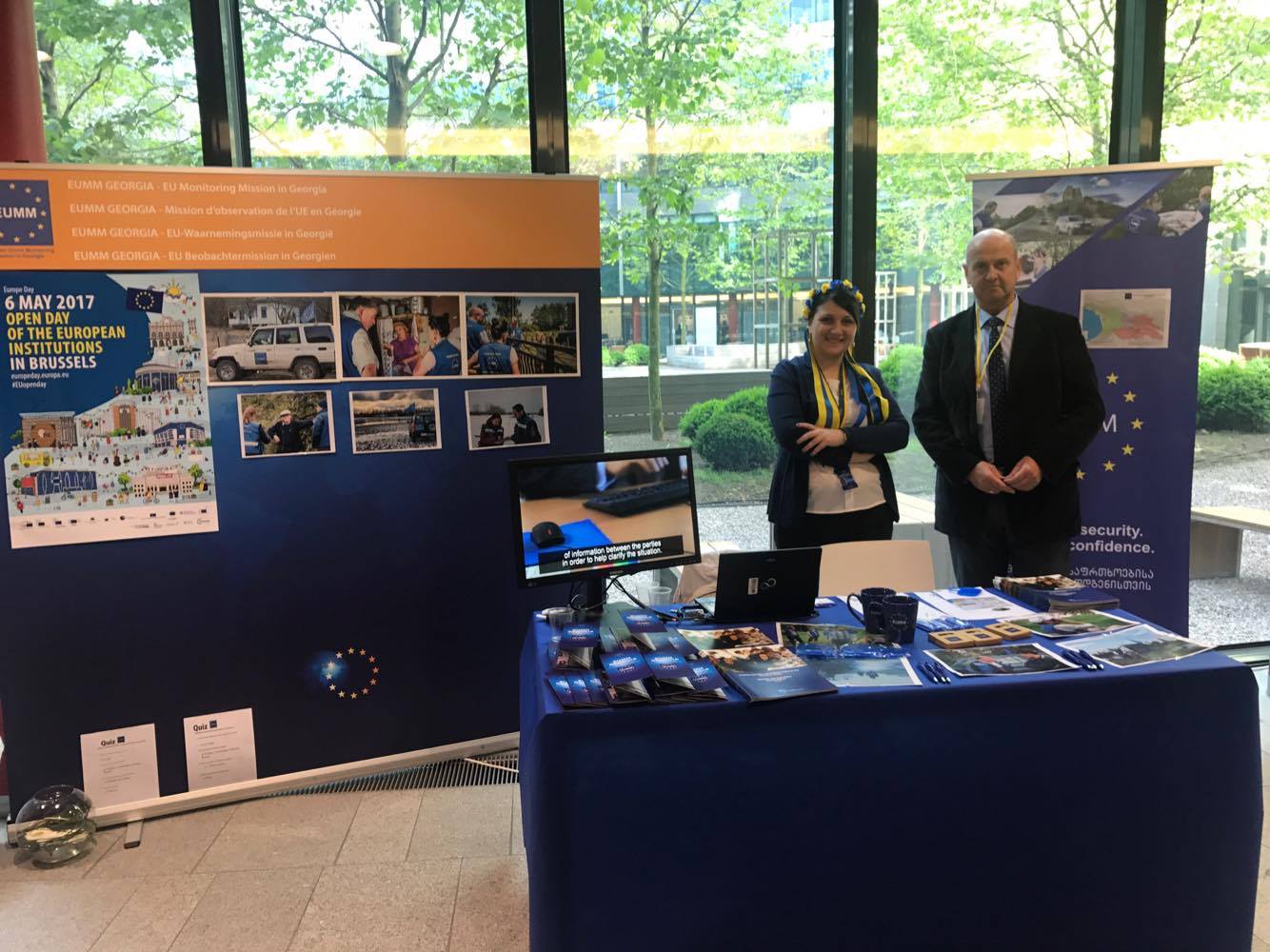 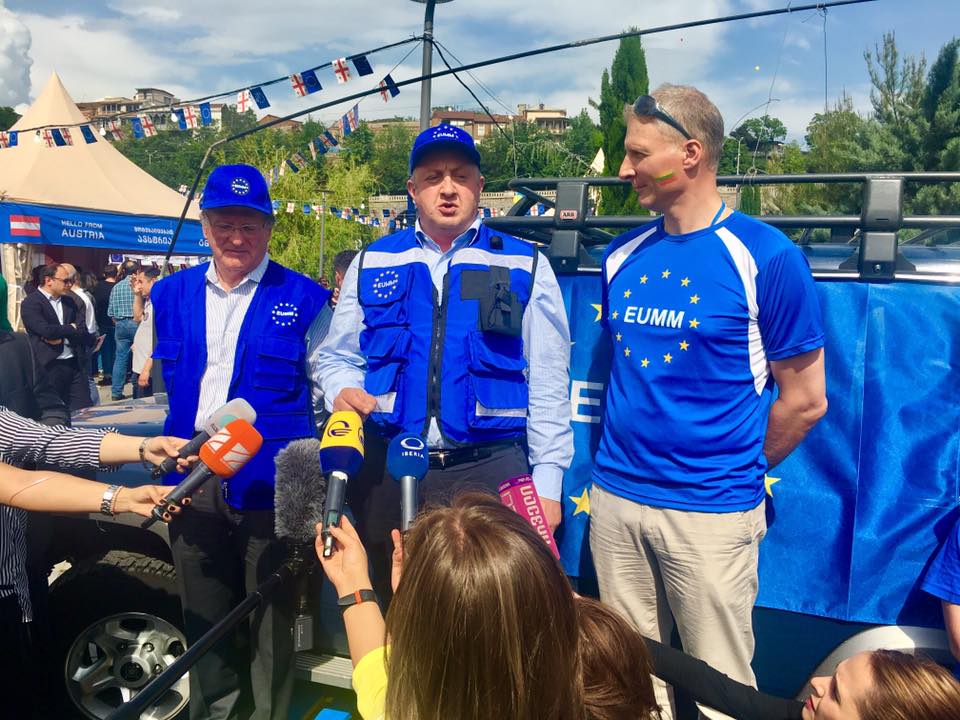 President of Georgia expressed his gratitude to the EUMM and its members for its contribution to stability in the region. (From left to right:  Head of EU Delegation to Georgia, Ambassador Janos Herman, Georgian President Giorgi Margvelashvili and EUMM Head of Mission, Ambassador Kestutis Jankauskas) 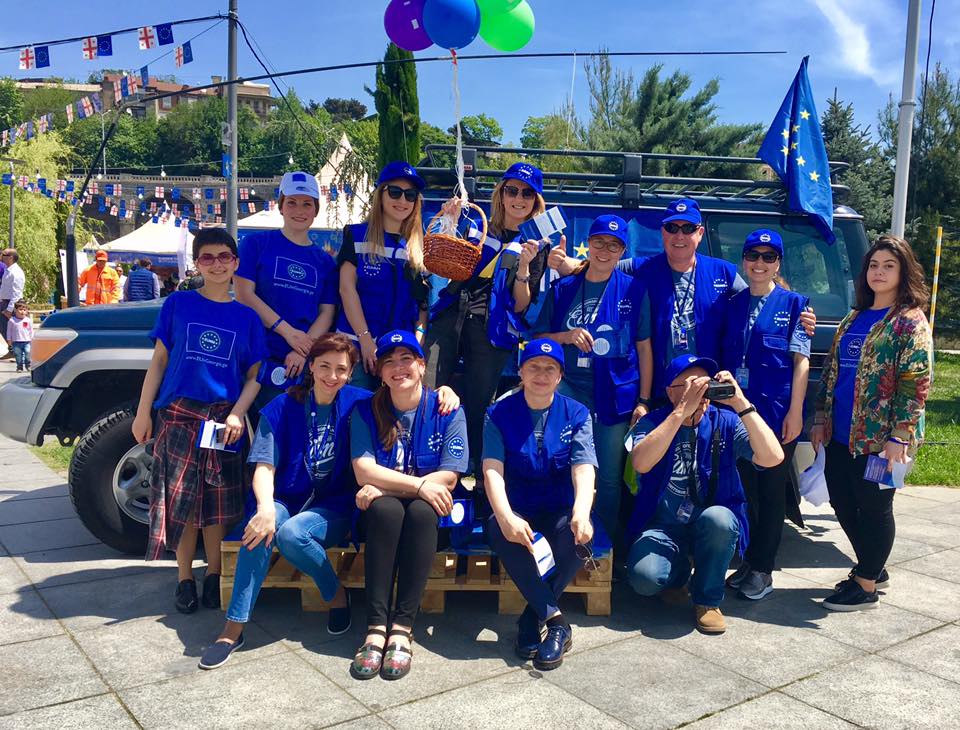