On patrol behind Russian lines 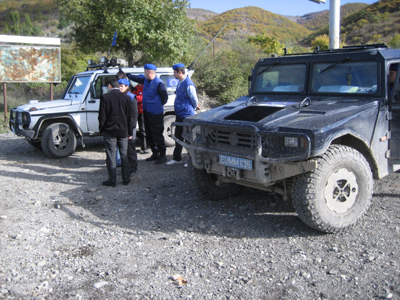 Officially labelled a hot-spot, Akhmaji village in the Akhalgori valley is very quiet. A small place with about 60 inhabitants, it's half-ruined houses look deserted. It is much your typical Caucasian mountain village, and the Georgian flag is hoisted at the flag stock by the village school. But the village is inside the area still controlled by Russian Armed forces, and our visit here is the first of an EU monitoring team.

The Akhalgori valley is one of the areas in the adjacent zone that the Russian Armed forces haven't yet left. According to the September agreement, they should have withdrawn to the positions held before the August war. But here, for some reason, they have stayed.

So far, there has been no way for the monitors to find out what's going on behind the administrative boundary line. But today, the Russian position seems to have softened: after a short conversation with the Russian officers at the checkpoint, we are let in to Akhmaji, and our cars roll in to park on a small open space inside the tiny village. A couple of school-kids greet us in Russian: “ privet, kak dela?” Hello, what's up?

Except for that, we are not getting much attention. Actually, we are having some problems finding any people at all in Akhmaji. After a while, we meet a man in his forties, a rather tall guy in a striped sweater. His Russian is excellent, and he tells us about life in the village.

“ Basically everything is fine”, he says. “We live as we always have. No problems at the checkpoints. I went to Tbilisi yesterday, my younger brother and my parents live there. I returned late at night and was let through. You don't have to pay bribes or anything, but they do appreciate it if you give them some cigarettes. I've been in the army, I know what is like to sit in the middle of nowhere, without fags or anything”.

The villagers tell us that most people have left years ago. Life in the city is appealing, especially to the young people. Many have left for Tbilisi, others are working in Russia. Some have emigrated to Europe. Only a few families are left.

Still, the village boosts a school. Arguably the nicest house in the village: a bright, almost crisp, two-storey building with a wonderful view of the valley. You can see the checkpoints from here as tiny dots along the roads. The valley itself remains totally civilian.

The school is closed. We got mixed messages about iwhether it was working or not. One villager said that the school was open, another says that it has been closed for months. Still, the building seems well kept, no signs of decay or vandalism that you witness on all the deserted houses – and there are a lot of them here.

We continue our walk about the village. In a courtyard, an old man is attending to a huge pile of cabbage. We greet him and start small-talk about farming and harvesting. He's being helped by two younger men, who squat beside the cabbage-pile, while we're talking.

“We hardly noticed the war” he says. “We could hear the war-planes flying, and we heard a lot of stories about the fighting. But we didn't have any problems right here. The checkpoints are ok. Obviously they're constantly begging for cigarettes and bread – I don't know if they get any supplies at all, but they're never aggressive or mean.”

A typical feature for Akhmeji, is the fact that the village is mixed. A group of men are hanging around, watching the women carry water from the tap.

“ I can't see any cause for war,” one comments. “Why should we fight. I'm Georgian, his Ossetian, you're European... We are brothers, friends. I know that this guy will help me any time I need. We don't fight, we're neighbours.”

We stay in the village for about an hour, talking with the villagers, walking around. Letting everyone know who we are and why we are there. It's a beautiful day. Akhmaji looks peaceful, despite the checkpoints, the soldiers and the poverty.