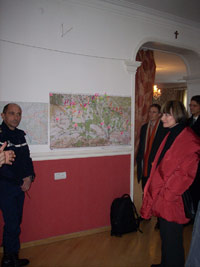 She was met by General Gilles Janvier, Deputy Head of Mission as well as the Head of FO Gori, Colonel Stephane Burel. She received a briefing on the EUMM’s mandate, work and challenges and the current situation on the ground. The Deputy HoM responded to the questions of the Swiss Delegation on the political dimensions of the situation.

General Janvier described the practical approach of the EUMM, stating that the focus of the Mission is to build confidence on the ground amongst all the relevant authorities. Ms. Calmy-Rey showed great interest in the work of the Mission.