From 5-8 October, the European Union Monitoring Mission (EUMM) and the Embassy of the Republic of Poland co-organised a series of concerts in Georgia to reflect the Polish EU Presidency and EUMM visibility. The Rzeszow Klezmer Band from Poland played in Tbilisi, Zugdidi and Tserovani. 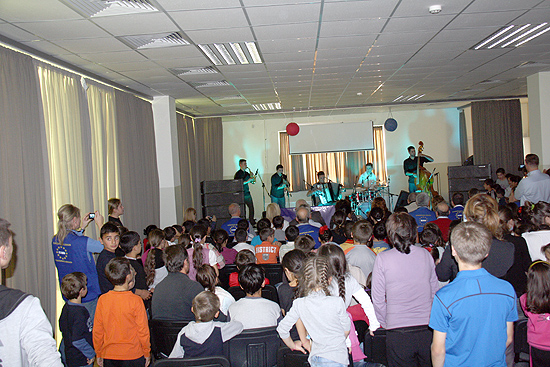 The last of the three concerts was held at a school in the Tserovani settlement for Internally Displaced Persons. The village houses six thousand people who had to leave their homes during the 2008 conflict.

The concert was opened by Ambassador Andrzej Tyszkiewicz, Head of the EUMM and Mrs. Urszula Doroszewska, the Ambassador of Poland in Georgia. Everyone thoroughly enjoyed the wonderful music and the event was an opportunity for the audience to get to know a little piece of culture from another part of Europe.

The school hall was crowded and the musicians were applauded for their high standard of performance of Polish Jewish music, with influences of jazz and traditional European sounds. Before them Georgian choirs also performed.