On her three day visit to the South Caucasus, Catherine Ashton, EU High Representative for Foreign Affairs and Security Policy/Commission Vice-President met the Head of the EU Monitoring Mission in Georgia, Ambassador Andrzej Tyszkiewicz on Wednesday.

The High Representative was briefed on the general situation in Georgia, as well as the current activities and challenges of the Mission.

Ambassador Tyszkiewicz highlighted the Mission’s role in contributing to stabilisation, normalisation and confidence-building. He updated Catherine Ashton on recent Incident Prevention and Response Mechanism and bilateral meetings with the Russian FSB border guards.

The Head of Mission confirmed the excellent cooperation with the EU Delegation in Georgia and the EU Special Representative to the South Caucasus and the Crisis in Georgia.

He emphasised that Georgia was highly transparent in terms of military structures and activities, in full compliance with the Six-Point-Agreement that ended the 2008 war. Ambassador Tyszkiewicz also expressed his appreciation for the unilateral Memoranda of Understanding with the Georgian ministries of Internal Affairs and Defence, which unfortunately have not been reciprocated by the Russian or the de facto South Ossetian and Abkhaz authorities. 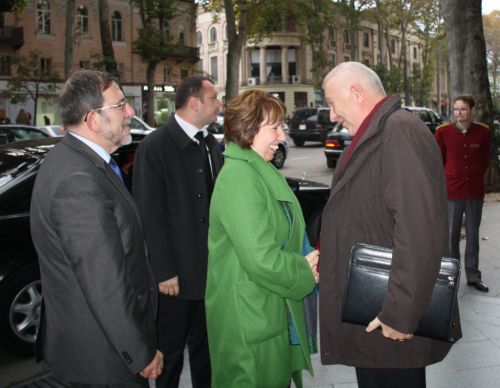