On 2 December, the EUMM closely monitored the situation and facilitated communication between all parties, regarding a shooting incident which took place near the Administrative Boundary Line with South Ossetia near the villages of Abano, Koda and Tsnelisi. Upon receiving the initial information that an incident had occurred, the Mission contacted all sides using the Incident Prevention and Response Mechanism telephone hotline and gathered information from its patrols along the ABL. EUMM monitors later met the minivan driver whose vehicle had been fired at and continued to follow developments.

Following intensive information sharing over the hotline, a meeting took place between the South Ossetian and Georgian security actors to discuss the incident.

The Mission calls on all sides to maintain a constructive approach and show restraint in order not to escalate tension. The Mission appreciates that the sides involved used the hotline to defuse the situation and clarify the circumstances of the incident.

The incident will be discussed further at the next Incident Prevention and Response Mechanism meeting in Ergneti this month.


Photo: EUMM monitors at the scene of the incident 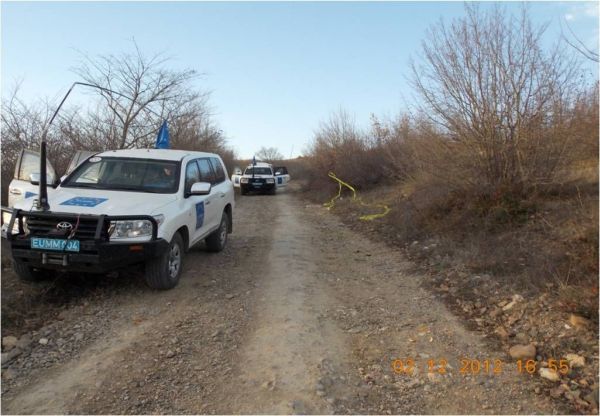