Today, EUMM Head of Mission Marek Szczygieł hosted a press conference on the 14th anniversary of the EU Monitoring Mission in Georgia. Exactly 14 years ago, on 15 September 2008, the Council of the European Union took a Joint Action, establishing the European Union Monitoring Mission in Georgia. Head of Mission Szczygieł explained how EUMM Georgia in the past 14 years has contributed to stability in Georgia and the wider region. Based on the Missions 4 lines of operation - stabilisation, normalisation, confidence-building and informing EU policy - he stressed key developments and challenges. He used the opportunity to also launch EUMM’s new corporate video, which highlights the Mission’s mandate and activities. 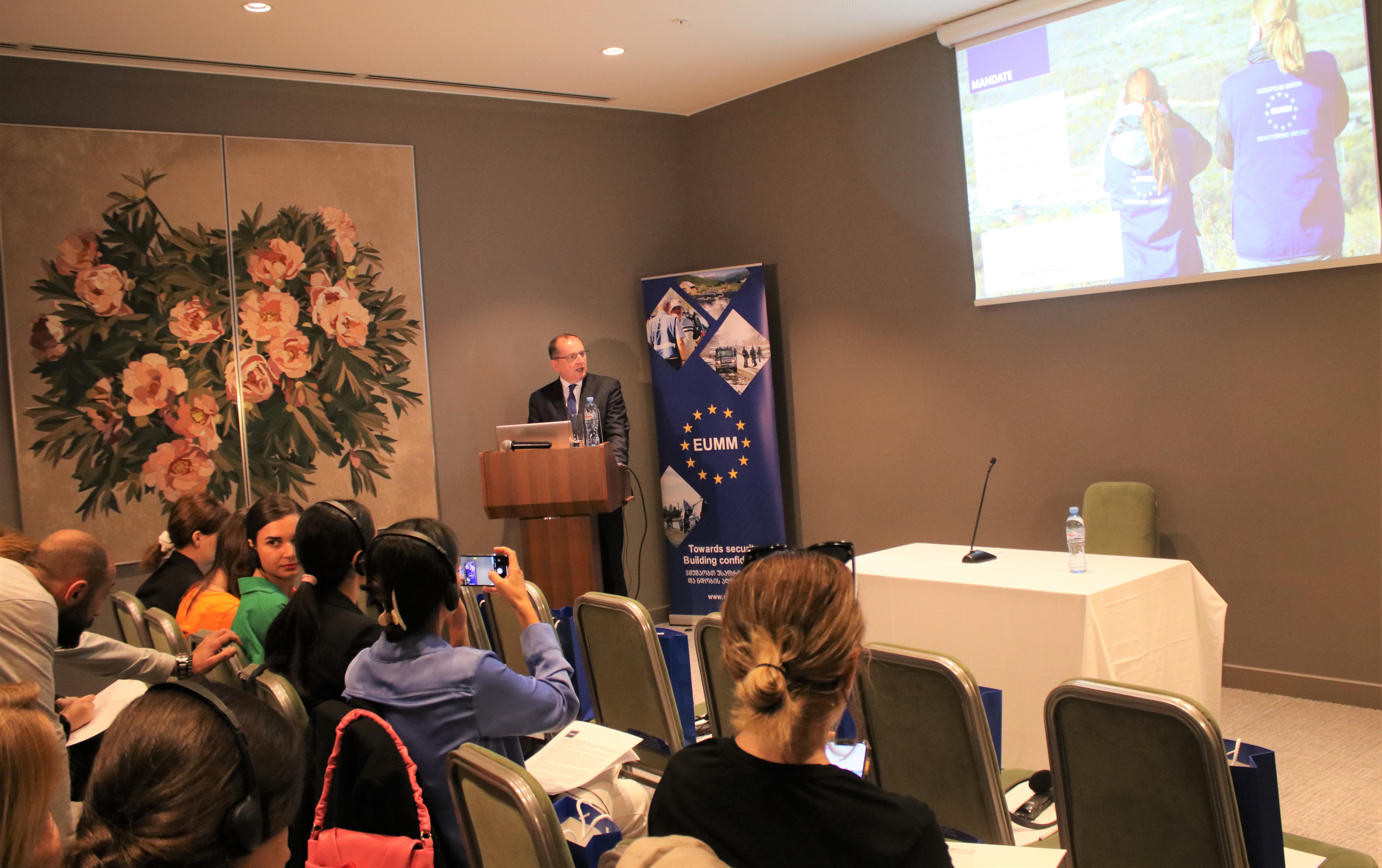 Stabilisation
Head of Mission Szczygieł elaborated that the Mission is currently conducting around 15 patrols a day, or around 100 patrols a week. Even during the peak of the Covid pandemic the Mission managed to maintain regular and visible presence along the Administrative Boundary Lines (ABLs). Since the first of October 2008, EUMM has conducted 82,021 patrols.
Head of Mission Szczygieł: “Through our 24/7 monitoring presence on the ground, especially along the ABLs, we make sure that there is no return to hostilities. It has a preventative effect: the parties know we are patrolling, and could bear witness to any activities they might engage in. As a result, we can say that the situation is more stable than immediately after the conflict.”
Normalisation
This relative stability, however, has taken place against a backdrop of ever-increasing challenges when it comes to normalisation. Head of Mission Szczygieł explained that the sense of separation and isolation of the 2 breakaway regions from the rest of Georgia is growing, due to the closure of crossing points along the South Ossetian ABL and ongoing ‘borderisation’ activities. Restrictions on local populations’ freedom of movement have diminished their opportunities to maintain social relations, protect their property rights, to have a decent income, and for children to be educated in their mother tongue.
In this regard, Head of Mission Szczygieł also highlighted that detentions create additional psychological barriers on top of the physical ones, and as such impose further restrictions on the local communities’ freedom of movement.

Head of Mission Szczygieł: “Currently 4 Georgian citizens are detained in Tskhinvali, 2 in Sukhumi. Through the available platforms our Mission constantly advocates for a quick release of those prisoners and that a humanitarian approach is applied.”
Head of Mission Szczygieł finally pointed out recent positive developments regarding the temporary openings of crossing points during the Easter and Lomisoba holidays, and from 20-30 August. “The high number of crossings during those days demonstrate the remaining strong ties between communities across the Administrative Boundary Line”, he clarified.
Confidence-building
Head of Mission Szczygieł explained that on Friday 23 September the 108th meeting of the Ergneti Incident Prevention and Response Mechanism (IPRM) will take place. “Over the years, the meetings have resulted in numerous practical achievements, ranging from the release of detainees to cross-ABL cooperation on agricultural matters and other issues important to local villagers”, underlined Head of Mission Szczygieł the importance of the meetings.
Furthermore, he stressed the crucial role of the EUMM-managed Hotline whenever an issue or incident requires immediate attention, as it allows for the exchange of information around the clock, seven days a week. “Since its establishment, the Hotline has been activated 17,781 times. And the number of Hotline activations is increasing each year. It shows how important this mechanism is to keep dialogue going, and to solve issues in a quick and practical manner”, according to Szczygieł.
Informing EU policy
Finally, Head of Mission Szczygieł explained how EUMM contributes to the EU’s and Member States’ foreign policy in relation to Georgia and the wider region through providing and relaying impartial and objective information. In addition, he gave examples of high-level visits to EUMM from both the EU Institutions and Member States: “This is of the utmost importance so decision-makers can see the security situation here with their own eyes. This allows them to take informed decisions and develop better policies towards the region.”
New corporate video
At the end of the press conference, Head of Mission Szczygieł launched the new EUMM corporate video. It highlights who we are, what we do, but especially why we are doing it. Our main objective remains unchanged: to contribute to stability in Georgia and the wider region.