On 15 December, on the first day of its extended mandate 2022-2024, the EU Monitoring Mission in Georgia (EUMM) inaugurated its new Headquarters in Tbilisi. The ceremony was attended by EUMM Acting Head of Mission, Dr. Tibor Kozma, Deputy Secretary General for Peace, Security and Defence of the European External Action Service (EEAS), Mr. Charles Fries and First Deputy Minister for Foreign Affairs of Georgia, Mr. Lasha Darsalia.

In October, EUMM said goodbye to its Tbilisi Headquarters building in Krtsanisi. After 14 years, the Mission Headquarters moved to new premises on 64a Ilia Chavchavadze Avenue, where the European Union Delegation to Georgia is also located. Today, the official inauguration in the presence of EUMM Acting Head of Mission Dr. Tibor Kozma, Deputy Secretary General Fries and Georgian Deputy Foreign Minister Darsalia took place. Together they unveiled the EUMM plaque at the entrance of the building. 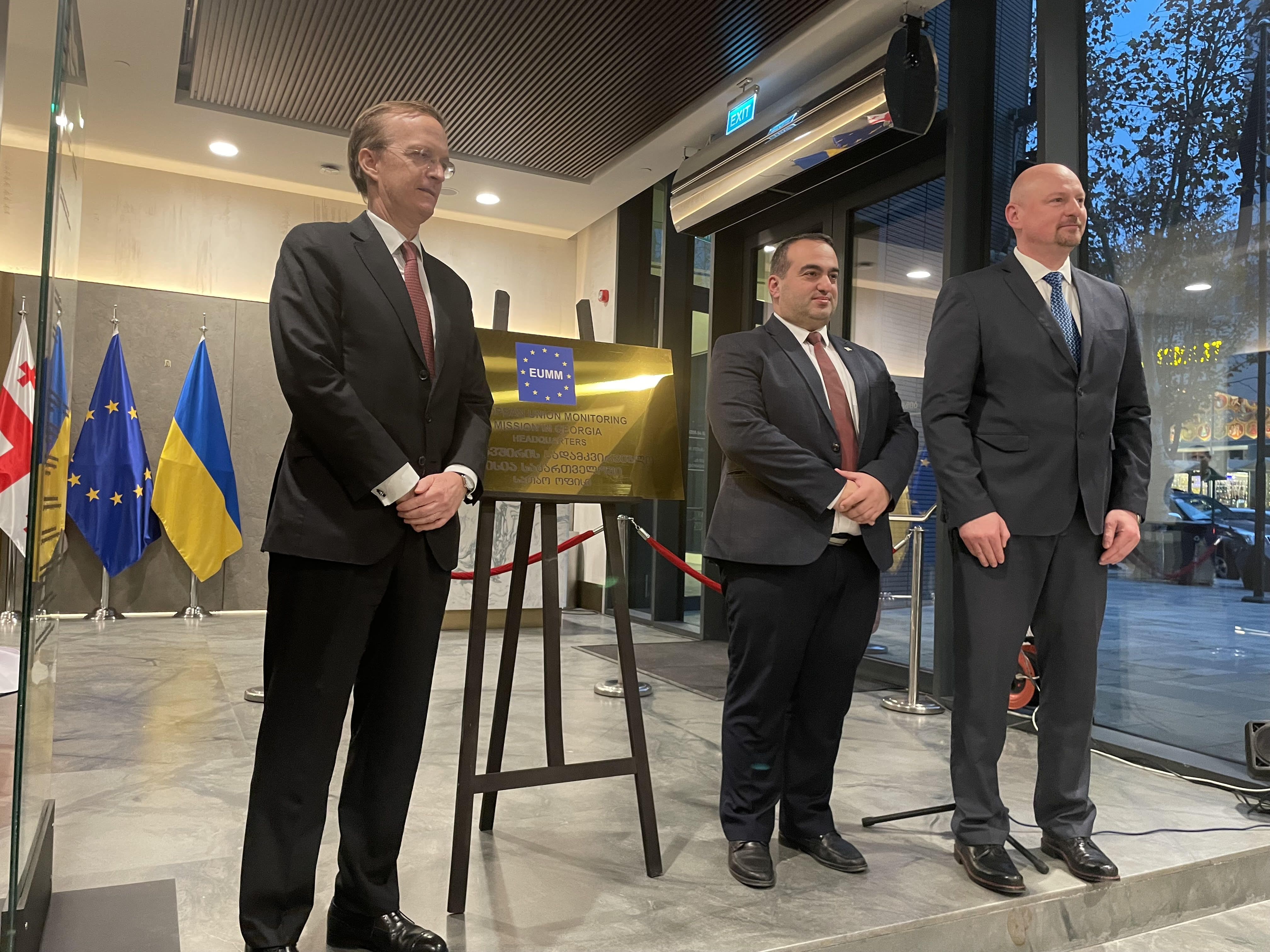 Acting Head of Mission, Dr. Tibor Kozma, said: “The move into our new premises, together with the renewal of EUMM’s mandate, demonstrates the EU’s strong, long-term commitment to peace and stability in Georgia. I can assure you that our monitors will continue to patrol day and night, helping to maintain stability in the region.”
Deputy Secretary General for Peace, Security and Defence of the European External Action Service (EEAS), Mr. Charles Fries, said: “I am pleased to inaugurate EUMM’s new HQ now located in the same facility as the EUDEL. This will further strengthen the already very good cooperation between Mission and Delegation and will showcase the EU’s increasingly Integrated Approach.”
Renewal of mandate
On 25 November, the 27 EU Member States extended the mandate of the EU Monitoring Mission (EUMM) in Georgia for another two years – until 14 December 2024.
The Mission remains fully committed to contributing to stability and security in Georgia and the wider region. All lines of the Mission’s operations as well as staffing levels will remain unchanged.
The new mandate allows the Mission to better adapt to current challenges. The Mission will further enhance its monitoring, reporting and analysis capabilities and reinforce its focus on areas such as conflict-related cultural heritage and cyber security. The newly established position of Environmental Adviser will aim to address issues at the intersection of climate and security.
On the occasion of the Council decision, the Acting Head of EUMM, Dr. Tibor Kozma, said: “The extension of our mandate shows the strong commitment of the European Union and its Member States to stability in Georgia and the wider region. In October 2023 the Mission will mark its 15 years of presence in Georgia, so this is a long-term commitment that is at the core of the EU security strategy. We are here to stay as long as necessary. As the only international monitoring presence in Georgia, we remain fully dedicated to the implementation of our mandate.”
Background
EUMM is an unarmed civilian mission of the European Union. It was deployed in October 2008 to monitor the compliance with the Six Point Agreement signed by Georgia and the Russian Federation following the August 2008 war. EUMM recently marked 14 years of its deployment in Georgia, while continuing patrolling day and night, 365 days a year.
The Mission currently has over 330 staff members stationed in three Field Offices in Zugdidi, Gori and Tbilisi, as well as in the Headquarters in Tbilisi. A total of 25 out of 27 EU Member States are represented in the EUMM staff.
The Mission’s key priorities are to: