33rd IPRM meeting in Ergneti: Hotline to be activated to give prior notice about planned agricultural work at ABL

Representatives of the Georgian and de facto South Ossetian authorities, as well as Russian Federation Border Guards who operate in South Ossetia met in Ergneti on 16 April. The 33rd Incident Prevention and Response Mechanism meeting was, as usual, co-facilitated by EUMM and OSCE and took place in a constructive atmosphere.

Participants welcomed the small number of incidents since the previous meeting on 18 March. With the aim of enhancing local communities’ safety, they decided to activate the Hotline in order to give each other prior notice about planned agricultural work carried out along the Administrative Boundary Line (ABL).

In a similar vein, ahead of the Orthodox Easter celebrations, EUMM’s Head of Mission Ambassador Andrzej Tyszkiewicz asked all participants to show leniency towards local communities visiting relatives or religious sites across the ABL.

Details on the process of amnesty and release of ethnic Ossetians were provided at the meeting. Information about the identity of a prisoner was shared. The possibility of an exchange visit to penitentiary inmates was raised.

Finally, participants discussed the situation in Zardiantkari and the importance of early warning on military exercises was once again stressed.

The next IPRM meeting will take place in Ergneti on 30 May. 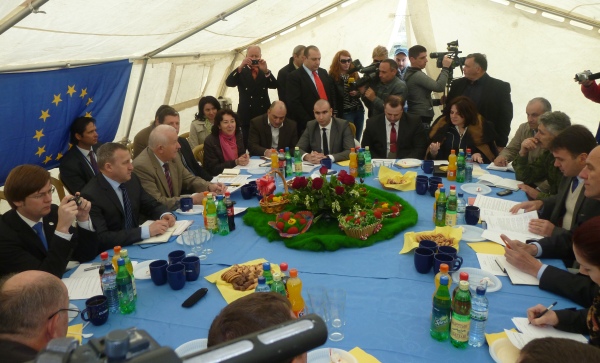