On 19 December 2017, the 83rd meeting under the Incident Prevention and Response Mechanism (IPRM) was held in Ergneti. The meeting took place in an open and constructive atmosphere.

Ambassador Guenther Baechler, Special Representative of the OSCE Chairperson-in-Office for the South Caucasus and Erik Høeg, Acting Head of the European Union Monitoring Mission in Georgia (EUMM), co-facilitated the proceedings.

Ambassador Baechler opened the proceedings and thanked the IPRM participants for their cooperation on the recent release of a Georgian citizen, who had been imprisoned in Tskhinvali for a long time. Mr. Høeg provided a brief summary of the latest events, which occurred since the last IPRM meeting. This included the general security situation, Hotline activations and detention cases. The security situation along the administrative boundary line (ABL) was assessed as controlled and a decrease in detentions since the previous meeting was noted. The co-facilitators thanked all participants for their agreement to provide prior notice of activities by security actors in the vicinity of the ABL, and invited them to share additional information on future events, via the Hotline.

Participants discussed military exercises, as well as the impact of the installation of new fences, barbed wire and signs on freedom of movement and livelihood opportunities for local communities. Joint action and future planning on irrigation of farmland and for the reduction of risk of wildfire incidents was debated.

The co-facilitators commended and thanked participants for their continuing engagement, which contributes to the stabilisation of the security situation in the region. All participants reconfirmed their commitment to the IPRM as an important platform to strengthen security and stability on the ground and to address the needs of the conflict-affected population from a humanitarian perspective.
The next IPRM meeting will take place on 24 January 2018.
The 83rd IPRM meeting participants gather for another session in Ergneti 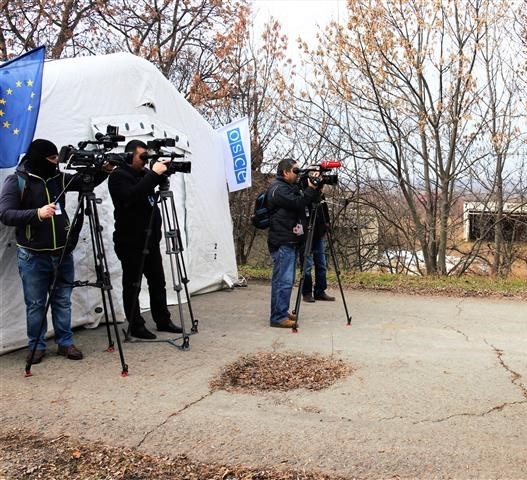 Local media focused on the IPRM meeting in Ergneti
Ambassador Guenther Baechler, Special Representative of the OSCE Chairperson-in-Office for the South Caucasus and Erik Høeg, Acting Head of the EUMM review details of the upcoming discussion prior to its commencement
Co-Chairs of the meeting invite the participants to start the discussion
The fruitful discussion is in progress
Mr. Høeg provided a brief summary of the latest events, which occurred since the last IPRM meeting
EUMM and OSCE members draft a joint press release on the results of the meeting after its completion