Maria Gullestrup, monitor at the European Union Monitoring Mission to Georgia (EUMM) Field Office Gori and a national of Denmark, is preparing for her next patrol along the Administrative Boundary Line (ABL) with South Ossetia. Today, Maria and her three women colleagues will observe the security situation in the area and speak with local communities about their challenges with gaining access to clean drinking water.

“As Patrol Leader I am in charge of the overall planning and conduct of our patrol. Our team will speak with conflict-affected women and men in the villages near the ABL. After the patrol, I will write a patrol report which will inform our Mission’s reporting about the situation of conflict-affected communities and areas to EU Member States,” Maria says.

Women currently comprise 27 percent of all international staff members at EUMM Georgia, which is 31 percent at the senior management level. EU Member States committed to increasing women’s participation in civilian Common Security and Defence Policy (CSDP) Missions in the Civilian Compact in 2018 – however, progress towards gender parity has remained slow. It is critical that Member States nominate more women candidates during recruitment rounds in order to improve the gender balance.

Increasing women’s participation in EU’s Common Security and Defence Policy Missions such as the EUMM is a matter of human rights and gender equality, and a requirement under the UN Security Council Resolution 1325 on Women, Peace and Security, which celebrates its 20th anniversary this month. Women’s equal participation is also a matter of operational effectiveness. Having balanced teams consisting of women and men reflects the communities where the EUMM operates, and enables the Mission to better access to local communities for information sharing.

“We need more women in the Mission. Women have a critical role in the success of peace operations,” Maria says. Nino Mumladze, Georgian interpreter at the EUMM, agrees:

“Having women in the patrol makes a difference and adds to an open, positive and easy interaction with local communities. Considering my background in communications, I’m eager to support interaction between my colleagues and the local stakeholders. Our discussion topics range from the security situation to healthcare and education. There’s always something new and interesting to discover,” Nino says.

Maria has enjoyed working for more than a year at the EUMM and has recently extended her stay for another year – she especially values the varied role of a monitor.

“You learn to drive an off-road vehicle in rough terrain in the mountains in a snowstorm, you will talk to locals, lead a patrol, monitor the security situation and report. Besides that, you can apply to do other things. I now also support Reporting Officers and work as a Gender Focal Point in our Field Office, but you can also work in Operations or in the Human Security team, to name a few of the available opportunities.”

“I have enjoyed working in Georgia, especially being part of a multicultural team in a very fast-paced environment. I am really happy I got this opportunity and would encourage other women to apply, too. I am proud of the work I do in contributing to peace and stability in the region,” Maria says.

Maria is proud of the work she is doing in contributing to peace and stability in the region, and encourages more women to apply to work in the Mission 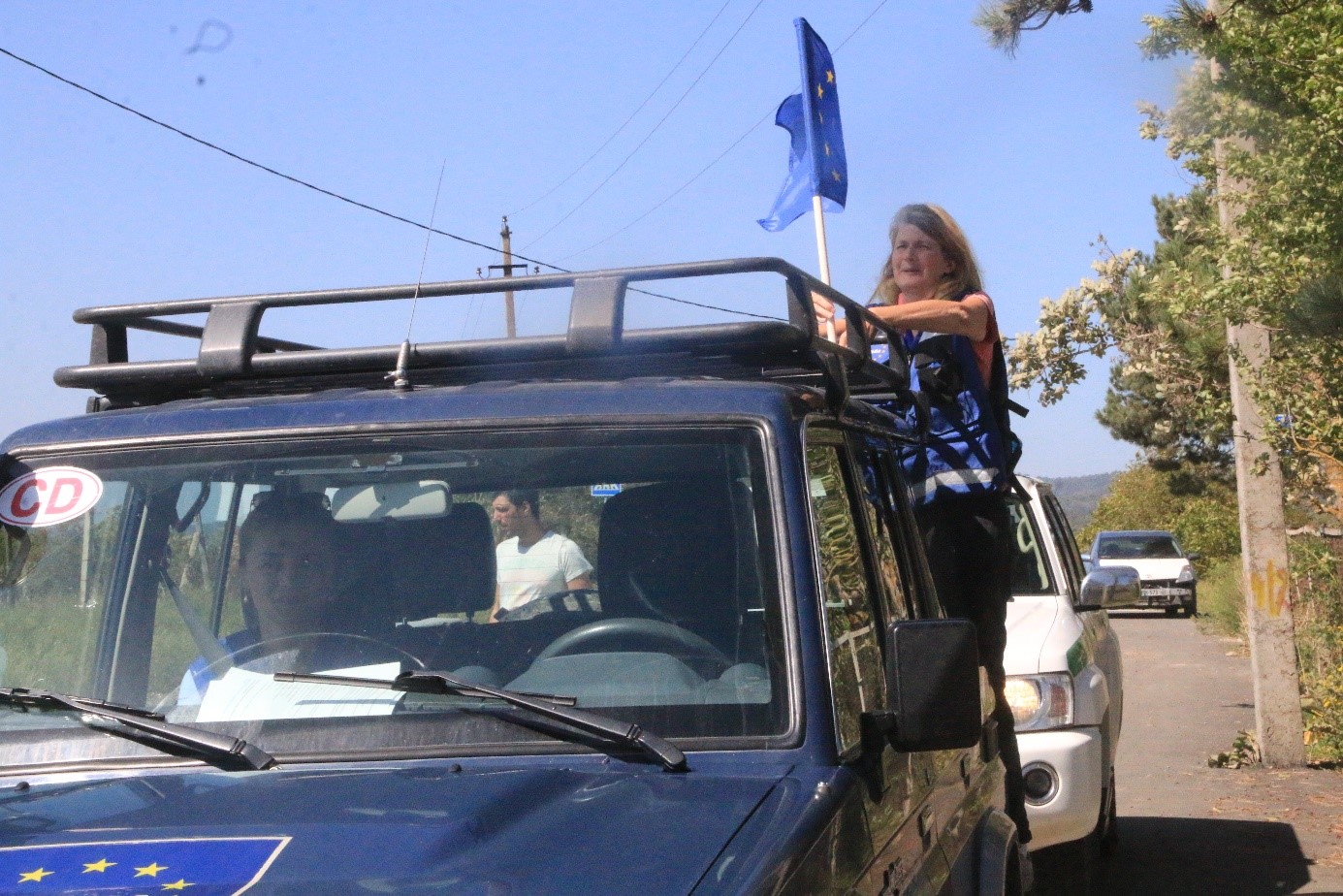 Interpreter Nino Mumladze notes that having women in the patrol makes a difference and contributes to an open, positive and easy interaction with local communities

Maria and her colleagues visit a village near the Administrative Boundary Line. Women currently comprise 27 percent of all international staff members at EUMM Georgia